History of Methodism in Cape May 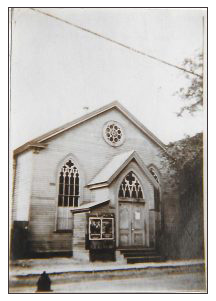 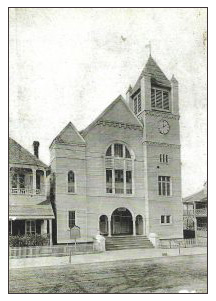 In 1867, The Rev. Albert Atwood had the foresight to record the history of Methodism in Cape Island (Cape May). At that time there had been nine pastors before him. The introduction of Methodism in Cape Island dates back to the year 1810. Rev. Atwood established this date by talking to one of the "oldest residents of the city". She informed him that when she moved from Fishing Creek in March 1811, that there was positively Methodist preaching at that period. In 1810 and 1811, Joseph Osborn and William Smith traveled the Salem circuit which included Cumberland and Cape May counties, preaching Methodism. Mr. Memucan Hughes, a prominant resident of Cape Island invited Osborn and Smith to preach at his house. They readily accepted and regular preaching was established at his house every other Wednesday evening. The location of his house was on Jackson Street below Washington Street.

During the next several years, Methodist preachers on the Cape Island circuit visited the Island and preached in the small schoolhouse and in private homes. In 1837, Mr. Smith Miller, a Methodist, began preaching. He was a schoolteacher in Cape Island at the time. He boarded at Brother Obediah Shaw's, who lived on Lafayette Street. Brother Shaw and Sister Shaw consented to let Miller have Methodist preaching in their home.

Also in 1837, two brothers, Rev. Israel Townsend and Rev. John Townsend both came and preached at different times at the schoolhouse on Franklin Street (where the firehouse stands today). Soon after the Townsend brothers established preaching on Cape Island, appointments were made for circuit preachers to make regular meetings every other Monday evening. This was really the first permanent establishment of Methodism in Cape May. From 1837 to 1843 prayer and class meetings were held in the home of Jeremiah Church, which for the first two years, was the headquarters of Methodism on Cape Island.

The Presbyterians, the Baptists, and the Methodists all worshiped in the schoolhouse on Franklin Street. Each denomination was entitled to use the schoolhouse two evenings in the week. The Methodists wanted extra meetings and Mr. Jonas Miller; the proprietor of Congress Hall, came forward and offered them the use of the dining room at the hotel. The offer was accepted and a series of revival meetings were held there. Religious interests were at an all time high throughout the community.

At a quarterly meeting conference of the old Cape May circuit, held at West Creek, October 15, 1842, a committee of three was appointed to obtain a suitable lot on Cape Island for the purpose of building a church. Brother Shaw donated a lot on Franklin Street and the church was erected in 1843. Its size was 32 feet wide by 40 feet deep. The cost was $1,030.00. Joseph Ware, Esquire was the master builder.

In 1849, Brother William Corgie (for which Corgie Street was named), gave the Methodists a lot at Osborn Street on which a little parsonage was built. In 1854, the Methodists sold their church on Franklin Street and purchased from the Presbyterians at Cold Spring, the church that the First United Methodist congregation is now occupying on Washington Street (next to City Hall). The Presbyterians had built the church in 1844 to be used by the summer people. The Methodists paid $4,000.00 for it and did some repairs. It was rededicated in June 1854. A parsonage adjoining the church and a chapel immediately in the rear were built in 1865. Brother Maskel Ware was the master builder. This structure was dedicated on July 2, 1865. This work cost a total of $8,500.00.

In 1857, at the request of the Mayor and City Council, a town clock was placed in the steeple of the Methodist Church. The Methodist church was chosen because it had the tallest church steeple in the City. The clock was to be kept in running order at the expense of the City. The clock was kept running until 1972. It was the responsibility of the Chief of Police to crank up the weight once a week to keep the clock going. Chief Howard Brown was the last chief to handle this unusual duty.

Hitching posts were important in the 1800's and the Methodists had them installed in front of their church in 1870. In 1874, gas fixtures were installed replacing the oil lamps. Another improvement in 1876 was a new organ to replace the melodian purchased in 1856. The remodeling and enlarging of the church was given serious consideration and in 1893 a contract for this work was awarded for $8,750.00. The work was completed and dedicated the same year. (This work was removed in 1972 as part of a remodeling project).

In 1917, the parsonage next to the church was badly in need of repair, and after consideration, it was decided to build a new parsonage on the corner of Franklin Street and Sewell Avenue. Twenty one preachers had the use of this parsonage until 2003 when it was sold and a parsonage was bought on Provincetown Drive in Tranquility, Lower Township.

The next big project was the children's chapel built in 1953. This was built through a bequest of Mrs. Mabel Hewitt. The kitchen was also remodeled at this time and the church office and two lavatories were installed. The children's chapel was dedicated on April 25, 1954. Today the chapel is used as an all-purpose room. This area also contains the pastor's office and an office for the church secretary. In recent years, during the winter months it has housed a City run day care center called Pelican Place.

An improvement campaign was carried out in 1956, the exterior of the church sanctuary was painted and the roof was replaced. The pipe organ needed repairs and was included in the project. The cost was $20,000.00.

Tragedy fell upon the church in 1957 when it's superintendent of Sunday Schools was killed. Morton C. Lyle was on a U.S. Navel Reserve weekend as a pilot. He died when his plane went down in the Italian Alps. The church's social hall was named in his honor. Also in his memory, a new church altar was given by his family on July 25, 1957.

Another renovation project was approved on May 17, 1971. This was to basically take off the front of the church which housed the upper room (which was originally a public reading room and later became a Sunday School room), the balcony to the sanctuary, the narthex, a ladies lounge, and the bell tower, all of which had been built in 1893. The project was to cost approximately $140,000.00. Rev. Daniel W. Kreh was the minister at this time. Rev. Leon Blackman, a former pastor from 1948 to 1954, was the crusade director. At the time, he was serving with the National Division of Missions for the United Methodists. Harry Reeves was the chairman for the crusade and his committee consisted of Charles Douglass, treasurer, David Heacock, the financial secretary, Arthur Cohen, Judy Hoffman, Walter Krieger, Mrs. Howard Stevenson, Harry Kunz, Ron Phillips, and Jean Rodan. The building committee consisted of Ron Phillips, chairman, Swain Hoffman, Harry Reeves, and Jonathan Sayer. The last service before the renovation was held on Easter Sunday, April 2, 1972. Services were held in City Hall, next door, during the renovation project. On July 15, 1973, the church celebrated a service of consecration. Bishop Prince A. Taylor, Jr. was in attendance for the service. At this time there were six former ministers still living: 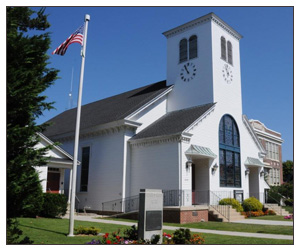 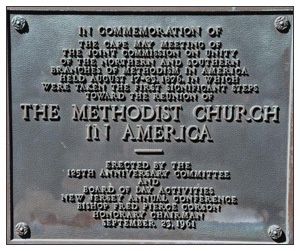 In 1985, there were two memorial dedications. One was the handicapped ramp given by Alma Jowett, in memory of her husband, Tom. The other was the flagpole and flag, given by Mr. and Mrs. Richard Finch, in memory of their son David. He died while serving his country in the United States Marine Corps; way before his time. (The handicap ramp, the flag pole and the historic stone monument call all be seen in this photo).

Some time in the latter part of 1988, part of the ceiling fell in Lyle Hall. Inspection revealed very serious conditions in other parts of the hall. The Board of Trustees met and talked about replacing Lyle Hall. The timing seemed right as Mrs. Evelyn Johnson had left the church her house on Beach Drive when she passed away. This was used as a down payment by the The Board of Trustees and the church members got behind the project. Rev. Don Tabler had much input and helped to put the official wheels of the church in motion. A resolution was passed to finance the construction of the new Lyle Hall on April 9, 1989. One of the sadder things at the inception of the project was that Ed Filer, chairman of the building committee, had a heart attack and died. Bob Elwell was asked to take Ed's place and since he was retiring from the Prosecutor's Office, he agreed. Others on the building committee were Frank Moore, Jack Sayre, Scoop Groover, Walter Krieger, David and Peg Sagers, Peg Dickey, and David Chapman. On January 7, 1990, groundbreaking ceremonies were held. Many of the church children took part by turning a shovel of dirt. Once the wall studs were up, the children's Sunday School classes came out and wrote Bible verses on the inside of the walls, only to be insulated and sheet rocked over! Most of them will never forget the verses they wrote on the wall. During the service of dedication on January 6, 1991, Sunday School children carried some of their furniture from their classrooms into the new Lyle Hall. As with every event we have, we followed the dedication with a great dinner! 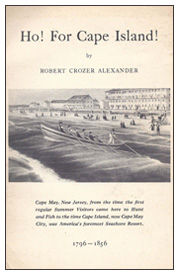 In 2003, the Franklin Street parsonage, which was on the corner of Franklin and Sewell Avenues, was sold to pay off the remaining mortgage of the Johnson Wing / Lyle Hall. This parsonage had served 21 preachers over the years. Rev. Don Tabler, lived there for 17 years as he ministered to us. A new parsonage was purchased on Provincetown Drive, in the Cold Spring section of Lower Township, in the sub-division known as Tranquility. Rev. Ron Crouch was the first pastor to live in this parsonage.

In July 2009, Rev. Rina L. Terry became our pastor, who faithfully served our church and the community through June 2015.

On July 1st 2015, Rev. Jeanette M. Block became our pastor. We look forward to serving together for many years, "Making Disciples for Jesus Christ for the transformation of the world!"

Today, Methodism in Cape May continues to be an important part of the life of our community. Thank God for all that He has given us and may we always be faithful and worship Him in spirit and truth!

This history was compiled by Robert W. Elwell, Sr.

NOTE: Additional information concerning the interest of the people of Cape Island in religious matters between 1796 and 1858 is exemplified in "A Sketch of the Rise and Progress of Methodism on Cape Island" by Rev. Socrates Townsend, the pastor of the church. This historical sketch was read at the Quarterly Conference on March 15th, 1858. It is presented in full in the book, Ho! For Cape Island! by Robert Crozer Alexander, published by the author, Cape May, New Jersey. Printed by Edward Stern & Company, Inc. U.S.A., Copyright 1956.
Cape May United Methodist Church
635 Washington Street, P.O. Box 472
Cape May, NJ 08204
Phone 609.884.3792
New Jersey Annual Conference
© Copyright 2022 Cape May United Methodist Church   |   Terms of Use - Privacy Policies
United Methodist Websites provided by Finding GodsWay Web Ministries, Inc., all rights reserved.